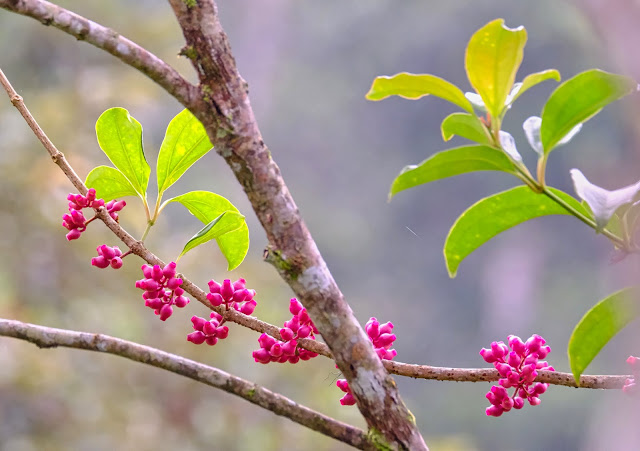 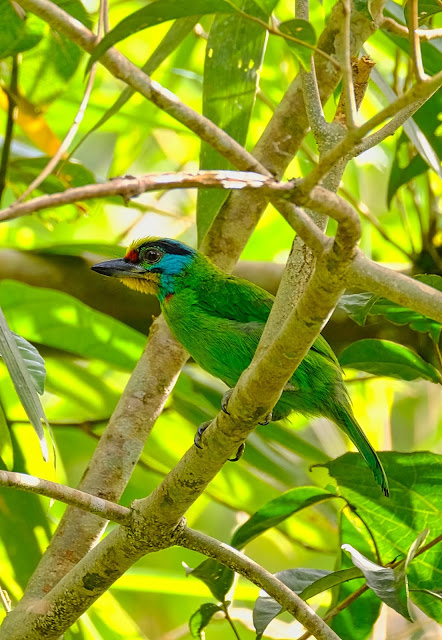 A pair of Green-billed  was sighted foraging together with a pair Black-browed Barbet in Awana Genting. You seldom get to shoot them in the open. The former is a regular sighting here whilst the Red-billed is more often seen in Bukit Tinggi.
News came that the Bukit Cincin gate is now closed from entry................ 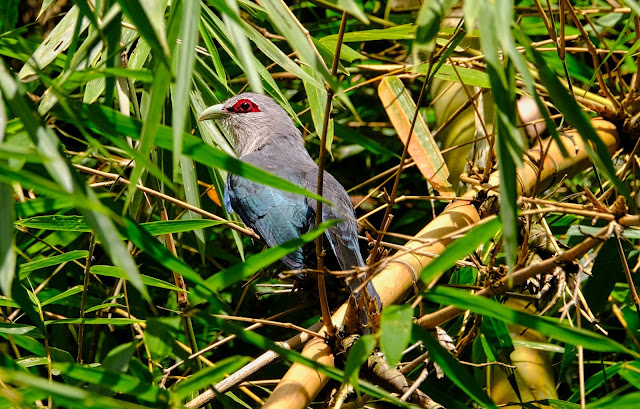 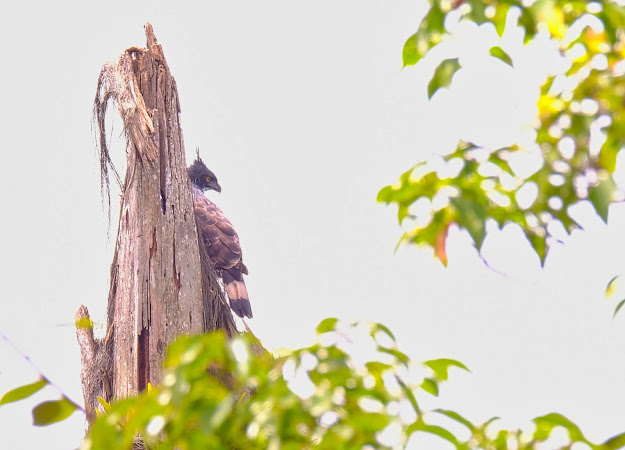 The bird was sighted at Richmond trail in the afternoon. Unfortunately for me  it landed behind the dead tree trunk at about 150 ft out in the ravine. Hence the record shot. It has a single broad white banding to  its tail  compared to the less seen  Wallace's 3 bars. And then there is the other Mountain Hawk Eagle which I have shoot in Fraser's 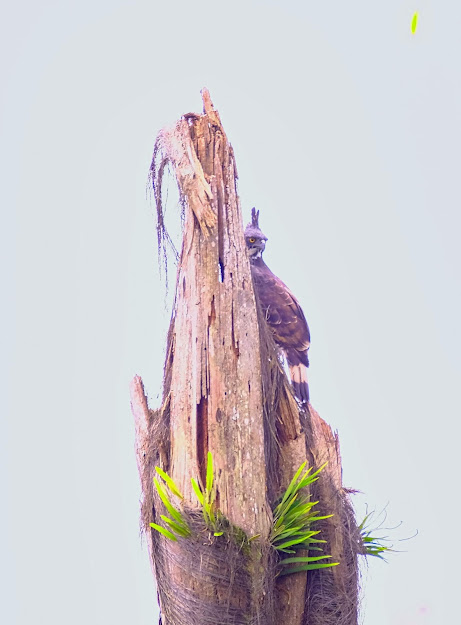 Bird life at BT is sporadic and sparse last weekend. The only consolation is the resident MPP  showing up. The male and female come out separately at long interval I suspect there is a nesting down the ravine. So within the nest week or so I hope there will be some chicks to shoot..................... 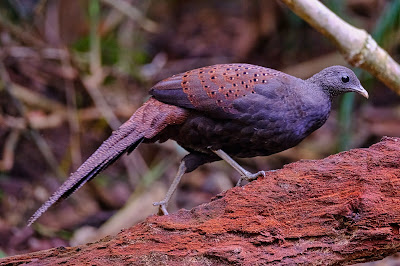 The Ferruginous Partridges were nowhere to be seen  for the past week.
Posted by mikebirder at 21:37:00 No comments: 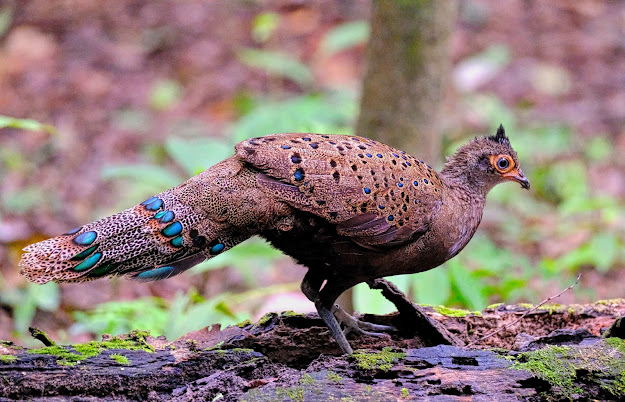 Is this going to be a game changer for Canon Birders. I cannot wait for its review. Hope Canon can do a Demo outing for Malaysian Birders to test the system.
The affordability & portability is name of the birding game. So at a low price of  RM4,000 for any of them and the weight - no more than 1.5 kg is fantastic news.  Somemore there is OIS stabilisation which complement the  IBIS (whopping 8 stops beating Oly) of their new EVF mirrorless full frame EOS R5 /R6 cameras. However you need to budget RM13,000 for the R5's 45megapixel body.
Question is 1. How good is its AF in lowlight shooting? 2. How is the DOF at the fixed F11 aperture? 3. And of course the sharpness. If its good I will be eyeing the RF 800mm. We will wait and see...........

The RF 800mm IS STM lens is a super telephoto prime lens with 4-stop image stabilisation and a greater reach than its sister lens, the RF 600mm IS STM. It is perfect for the wildlife enthusiast, and ideal for specialist pursuits such as bird and aviation photography. Lightweight, powerful and compact with excellent image stabilisation for handheld shooting, the Diffractive Optic (DO) design, along with the RF lens mount and a fixed, F11 aperture, helps make it a more compact lens and easier to pack into a travel bag. Designed for Canon’s Full Frame mirrorless cameras, its RF lens mount offers a faster communication speed than a conventional DSLR. Smooth and silent focusing from the STM motor is a real advantage too, particularly for video. 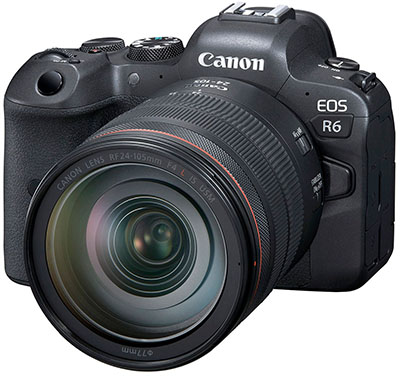 Performance: Despite the differences in image sensors, the R5 and R6 can both shoot at up to 12 frames per second using their mechanical shutters and 20 fps with the electronic shutter via silent photography mode. Where the R6 separates itself from the R5 in terms of performance is with respect to buffer depths. The EOS R6 can record 1,000 or more compressed raw (C-RAW) images, while the EOS R5's buffer depths top out at 260 C-RAW images when recording to either a UHS-II SD card or a CFexpress card. For regular raw images, the EOS R6 can record up to 240 images before the buffer is full, whereas the EOS R5 slows down after 180 raw images. Both cameras are powered by a DIGIC X processor.

Design: The Canon EOS R5 and R6 are similar in overall design, but there are a few important differences. The R5 features a top LCD panel, something not included on the R6. The R6 also includes a different dial for selecting modes. The R5 uses the same mode button design as the EOS R, whereas the R6 opts for a more traditional mode dial.

Price: The EOS R6 will cost around $2,500 USD, whereas the EOS R5 will be much more expensive, launching with a suggested retail price of around $3,900. 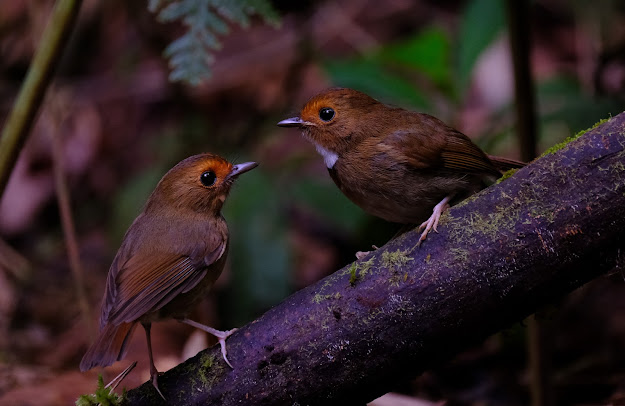 Before and After using Luminar4 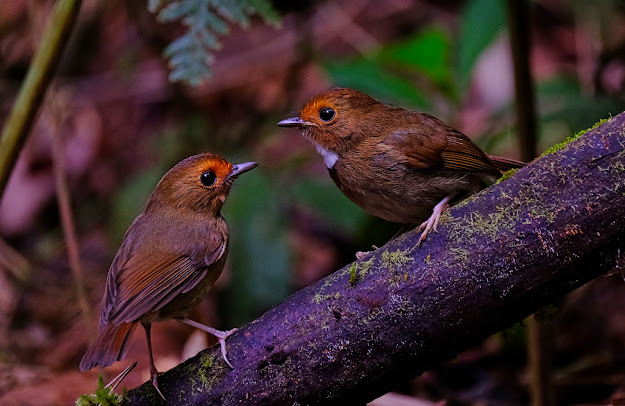 I was using a trial version Luminar 4.0 recently and I am quite impressed with its ease of use for its simplified scaling bar that suit my liking. The best is the one tap Preset- "SuperSharp" This save me a lot of time to enhance my bird photos. I always wonder  why my fellow birders' photos are so sharp & crispy. Now I know why and no longer envious of their counting feathers pictures lol.
I would highly recommend  you guys to try it out. IT REALLY AVIANLICIOUS GOOD. I would rate it 4.5 star for its affordable price. Wait for a discount if you intend to get it. BTW I only shoot in Jpeg.
Case1 - One Tap Preset is so handy and easy for anyone to boost the sharpness and vibrancy of your photo. Not to say Fuji colors are out but L4 just give the bird's more contrast and details which pop out......
CASE 2 Comparison of my usual Canon Editor vs Luminar4. Both are matching but L4 is more vibrant 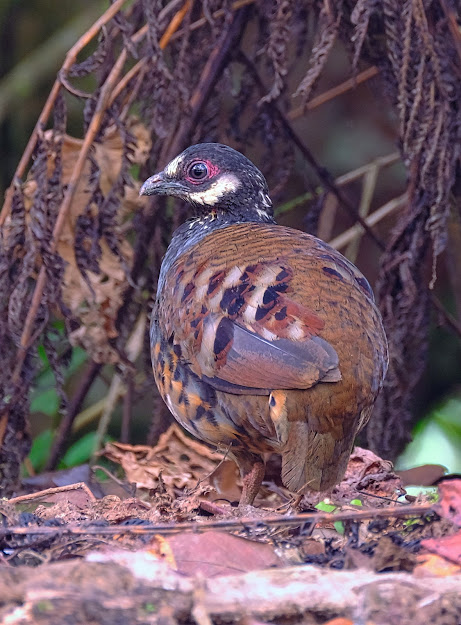 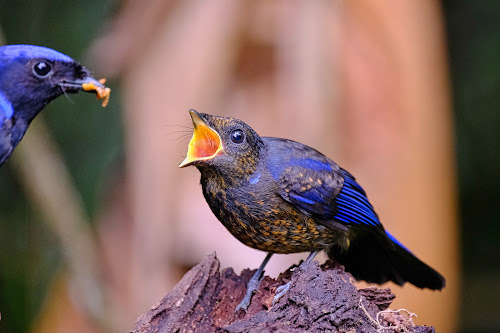 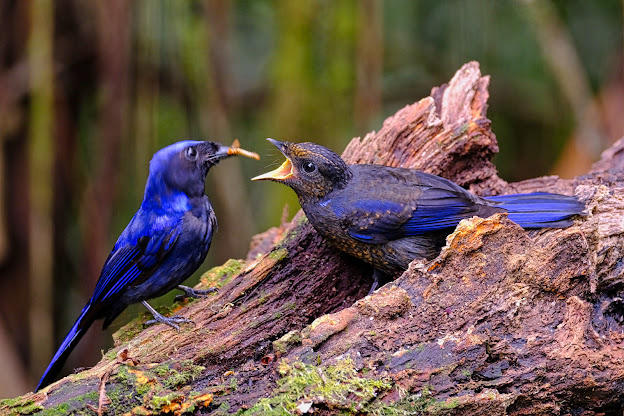 In the month of June - July the opportunity to get feeding action is there to capture. I was in Bukit Fraser for such an opportunity. It is not easy to shoot at low speed sub1/60s in low light condition.
Best to shoot at 1/250s at least with ISO3200 or higher if you camera can offer good noise control. 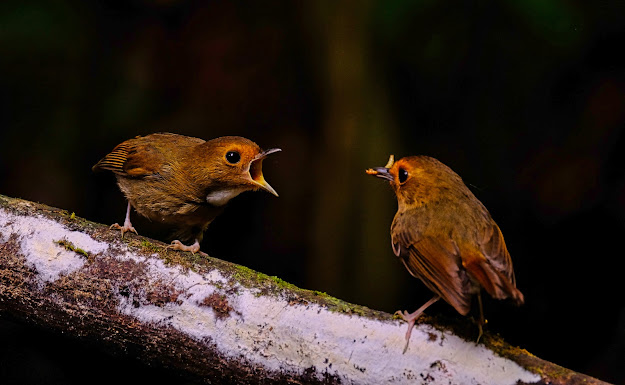 Other time you can only shoot the parent grabbing food  to feed its fledgling in the undergrowth. 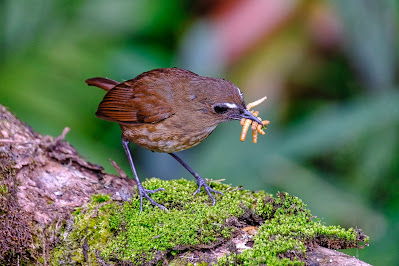 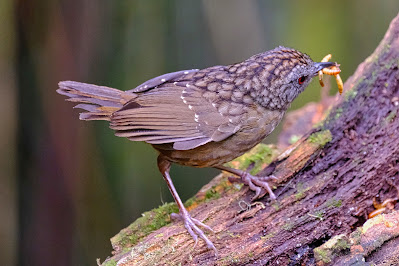 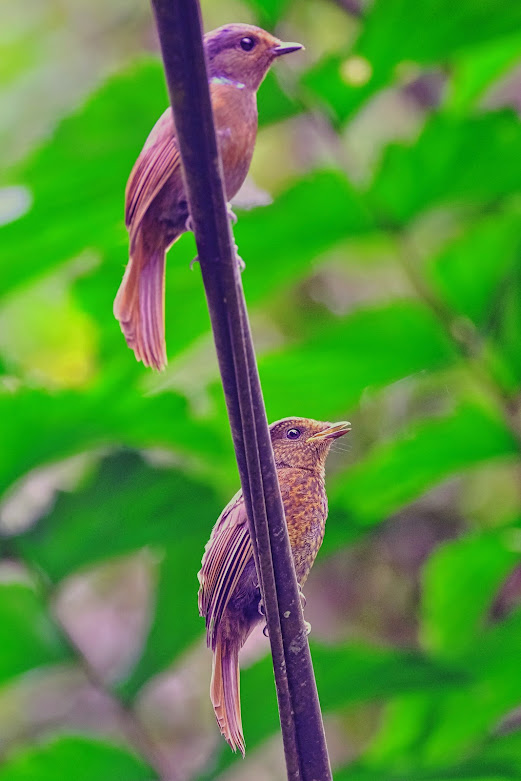 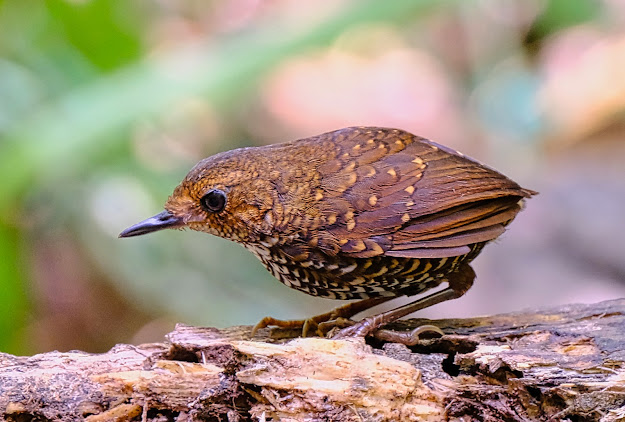 These are my best photos thus far of the Pygmy Wren-Babbler. I managed a speed of 1:125 or 250 at high ISO of 1600. Lighting was just perfect ie  bright overcast lighting at about 1.30 pm for me to get these pictures. As the bird is quite hyper during its venture out to the feeding log;  you really need higher speed to freeze the action. Most of the time you are about to get focus on it and trigger your shot and the bird is no longer in the frame WTFlower...........
There is no juvenile sighted other than the Grey-throated Babbler. The other common one namely the Buff-breasted Babbler  is still around. 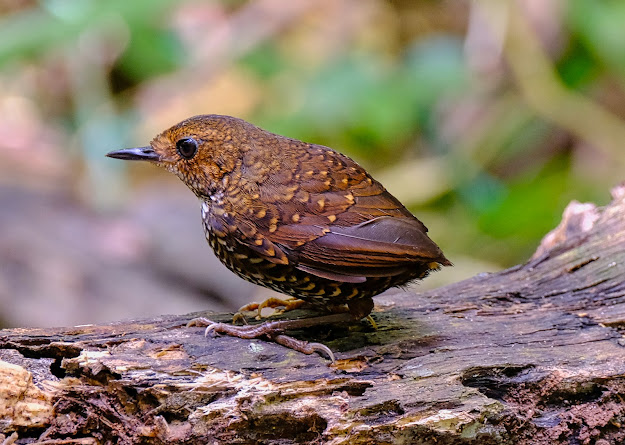 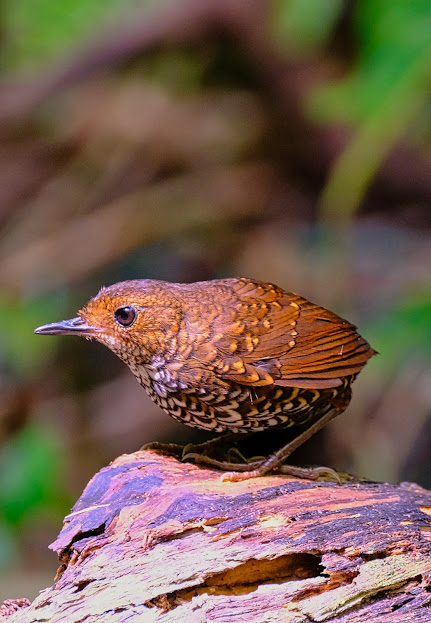