This is a submontane owl of SEA except Singapore. In Peninsula Malaysia Collared Owlet can be commonly heard & seen in Awana and Fraser Hill. The altitude range is from 400m upto to 3,000m.

It is the smallest of Owl coming in at about 7-8 inches in Malaysia. Besides its yellow eye and prominent streaked at its belly ; the owl has a buff and blackish face image at its nape ( back of neck).

It prey on small birds and mammal like squirrel. It do its hunting anytime; day and night. Most often when it call other birds will get agitated and try to mock the owlet. That is why it has this unique facial pattern at its nape to frighten off those nuisance birds wanting to mock it from behind. Pic2 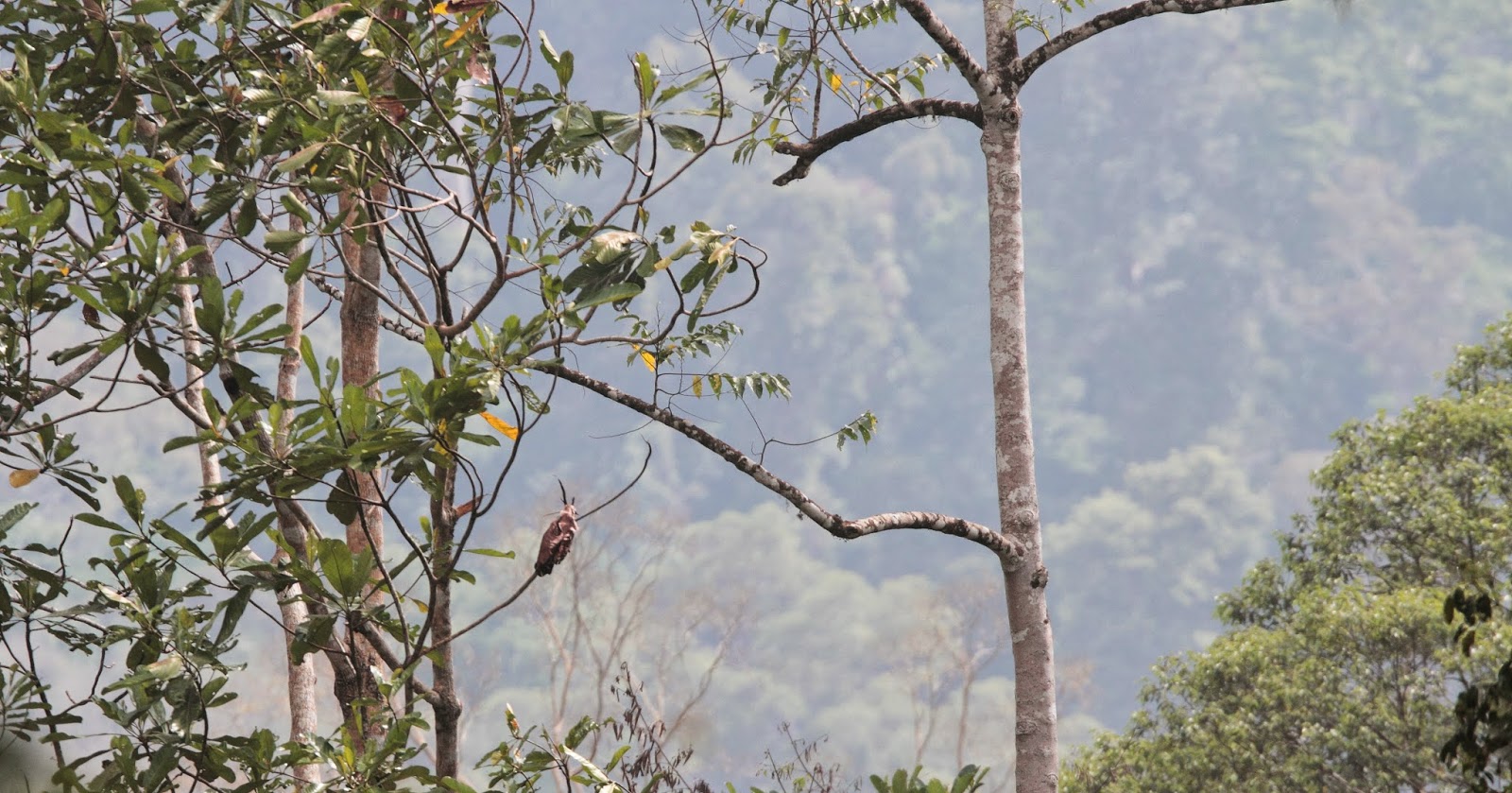 March usually a bit wet but not so in the middle of the month of 2014. Met Wong with his HK friend later at Krau side. They managed to see the resident Pitta in the wee morning. The tiger sanctuary fencing is still on going. There is much clearing and devastation to the place. The good part is now there are proper tracks into the jungle. Hopefully the undergrowth will regenerate fast.  Bird life was sporadic and not enticing during my visit in the second weekend. 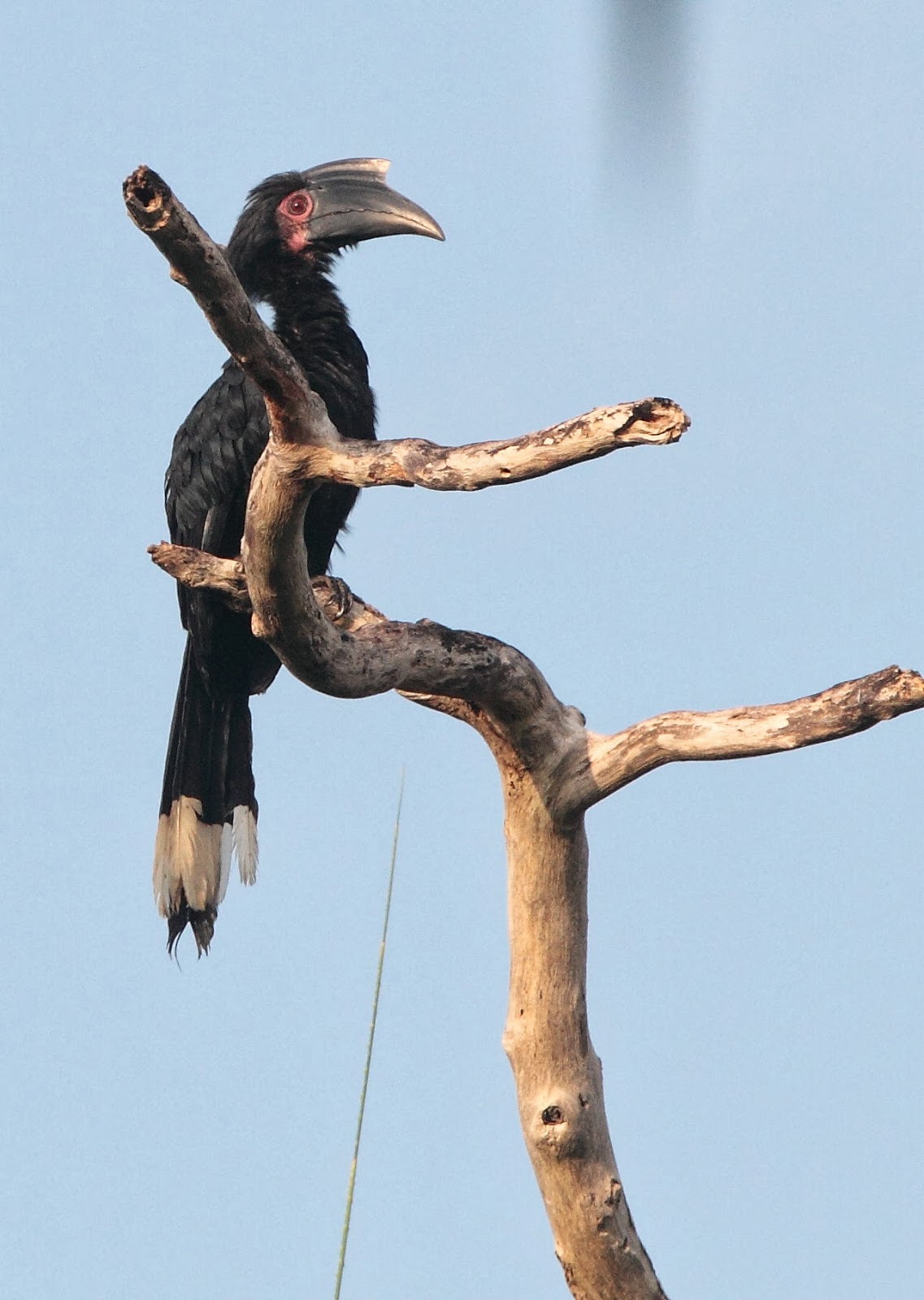 A lone female Black hornbill  was sighted immediately along Lanchang main road near a side stall about 50m away. It was casually preening itself with an eye overlooking me. 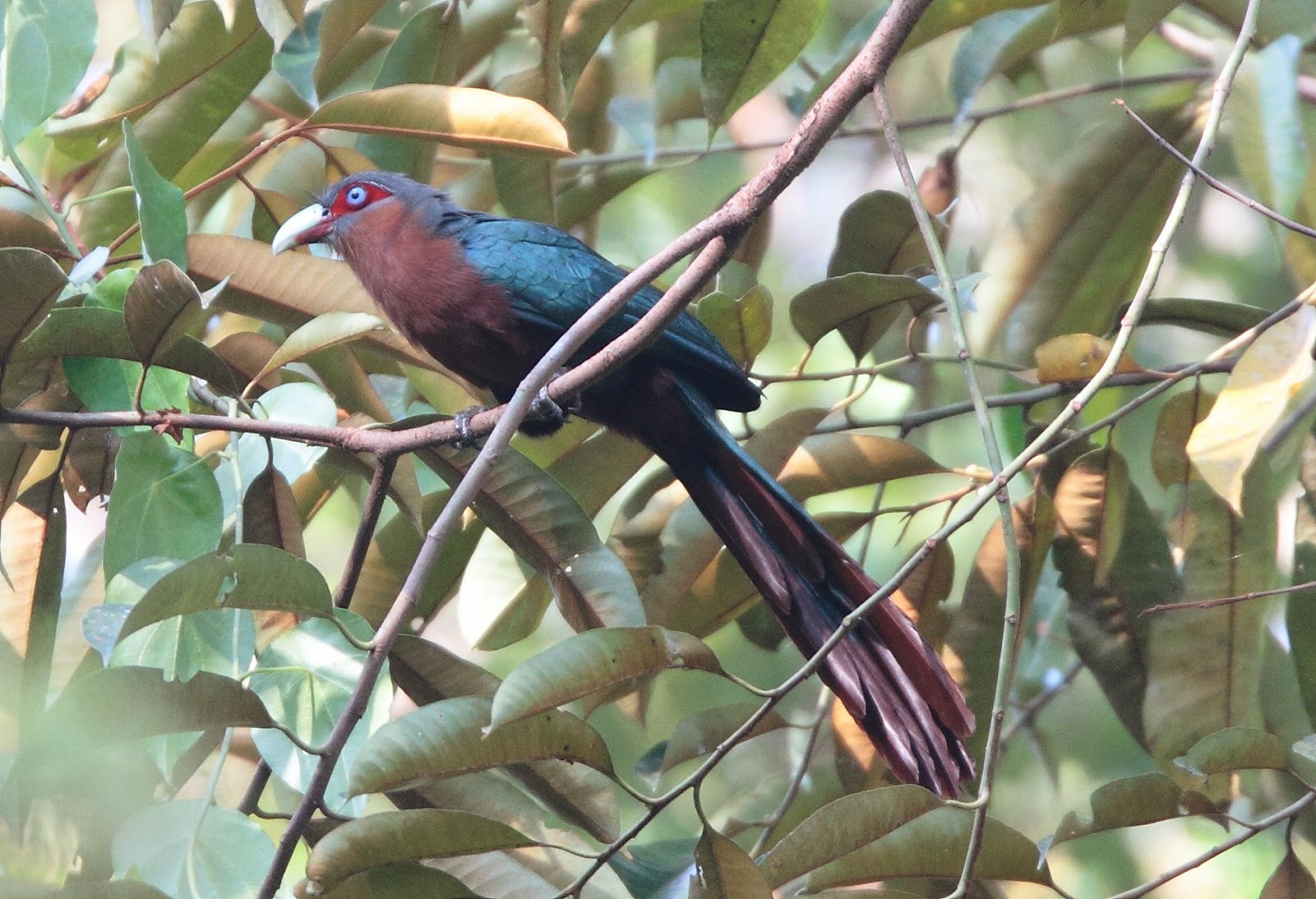 A pair of Malkoha  were around for a quite awhile This one with  longer tail is the Male which was more confiding flying over us. 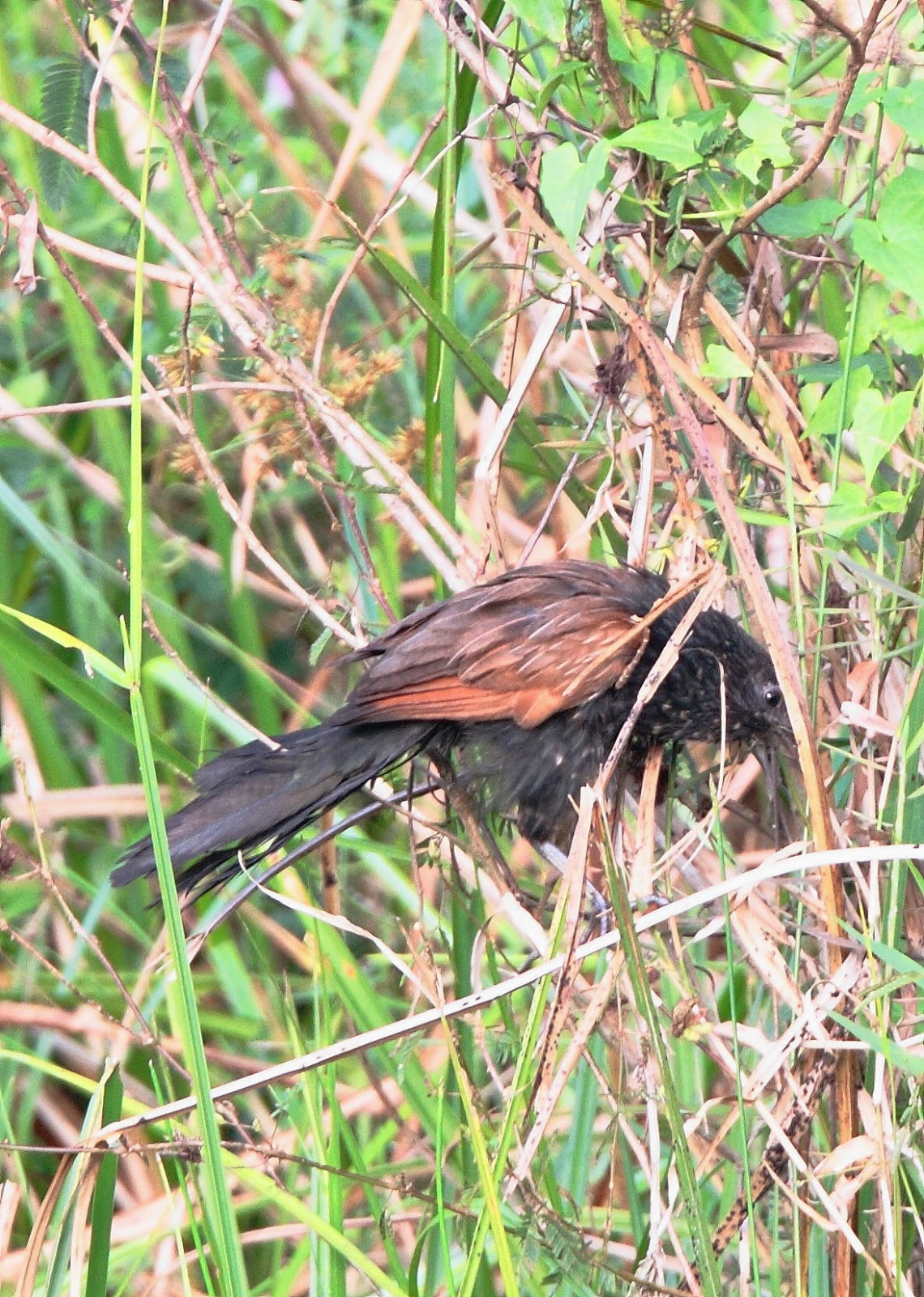 The Lesser Coucal looks haggard with its untidy feathers. Maybe after a bath as there is no sign of rain there. Wish it was the short-toed but looking at its leg it was unlikely and its greyish body do not blend as one. This was sighted at the nearest marsh to the junction to Deerland. 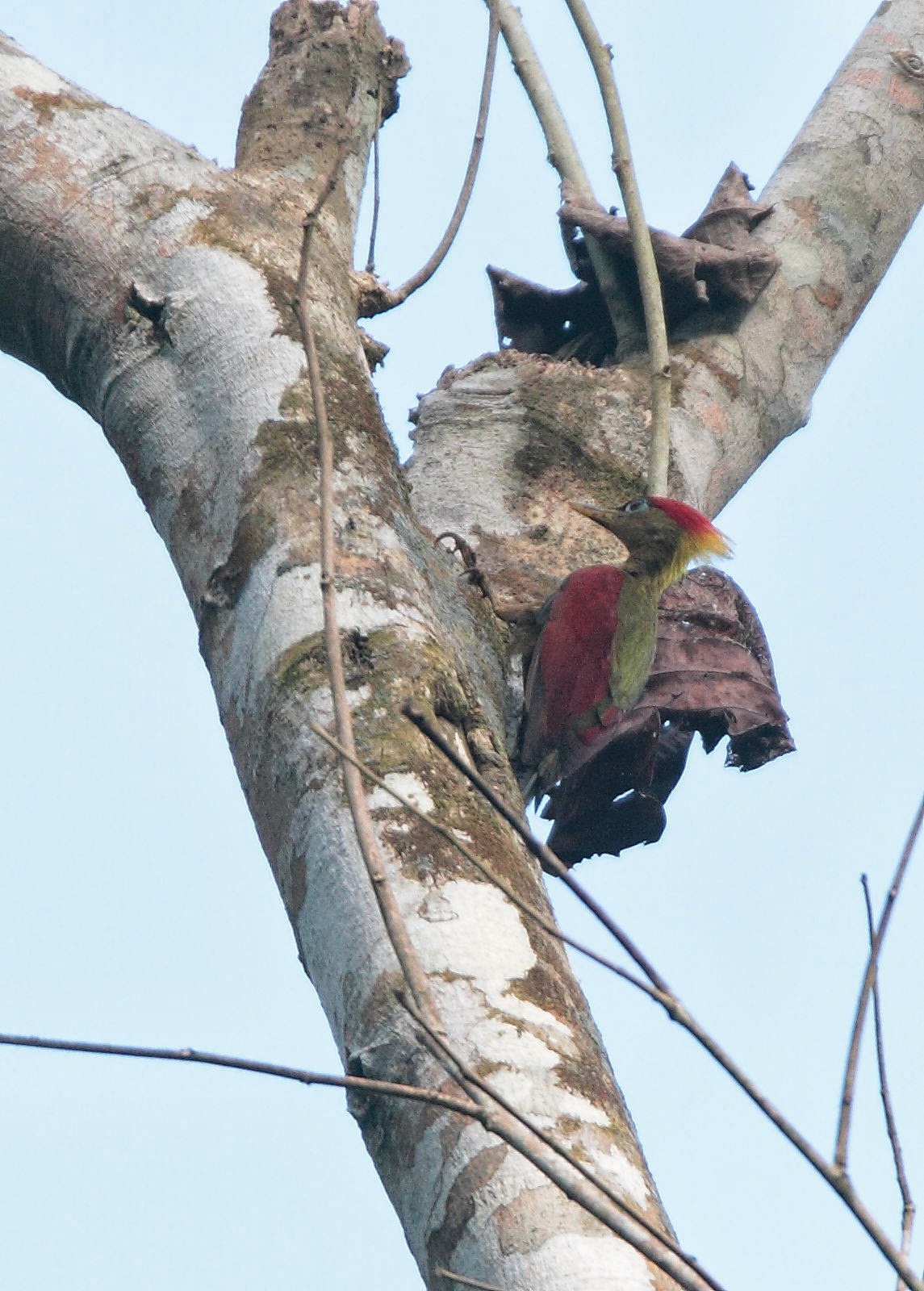 Another common woodpecker in Krau - Crimson-winged with its  blue eyering. 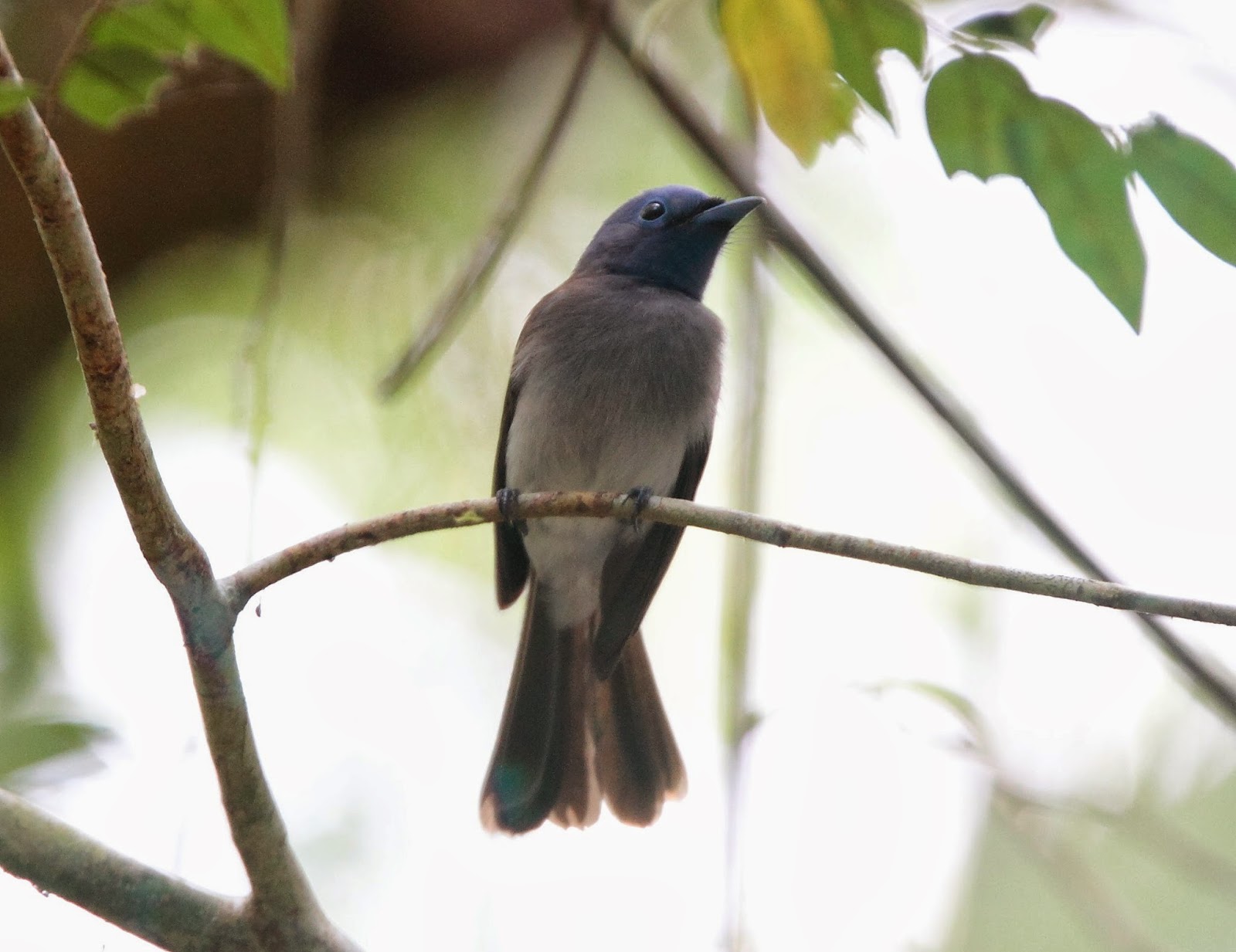 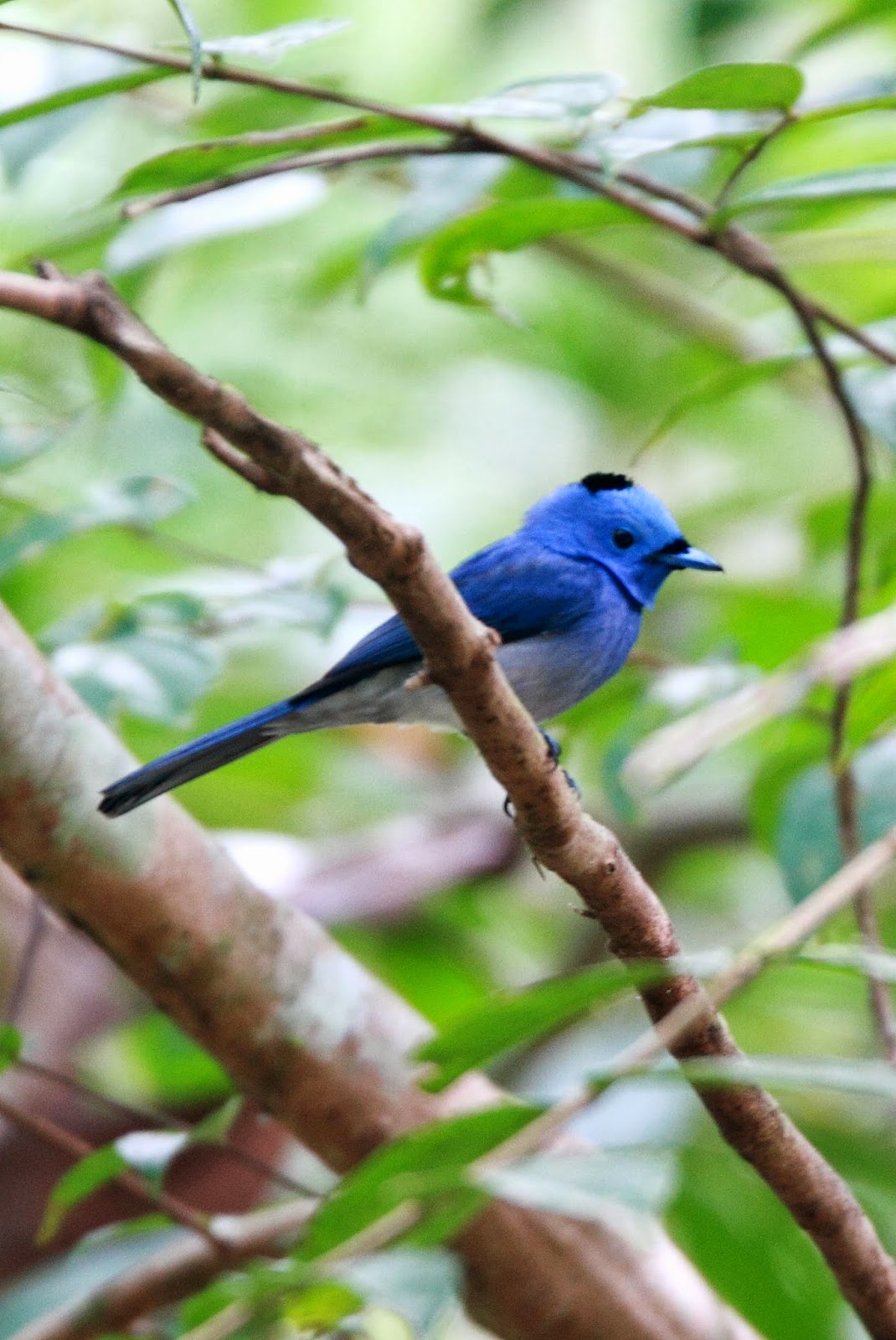 A pair of breeding Black-naped Monarch was curious enough to come to a close range of 25ft.  Another month or two a nest maybe ................. It has been awhile to see this beautiful flycatcher.

A pair of Orange-backed Woodie also came out abate in the middle storey of the forest trees. The female have a white streaked back which contrast its partner. 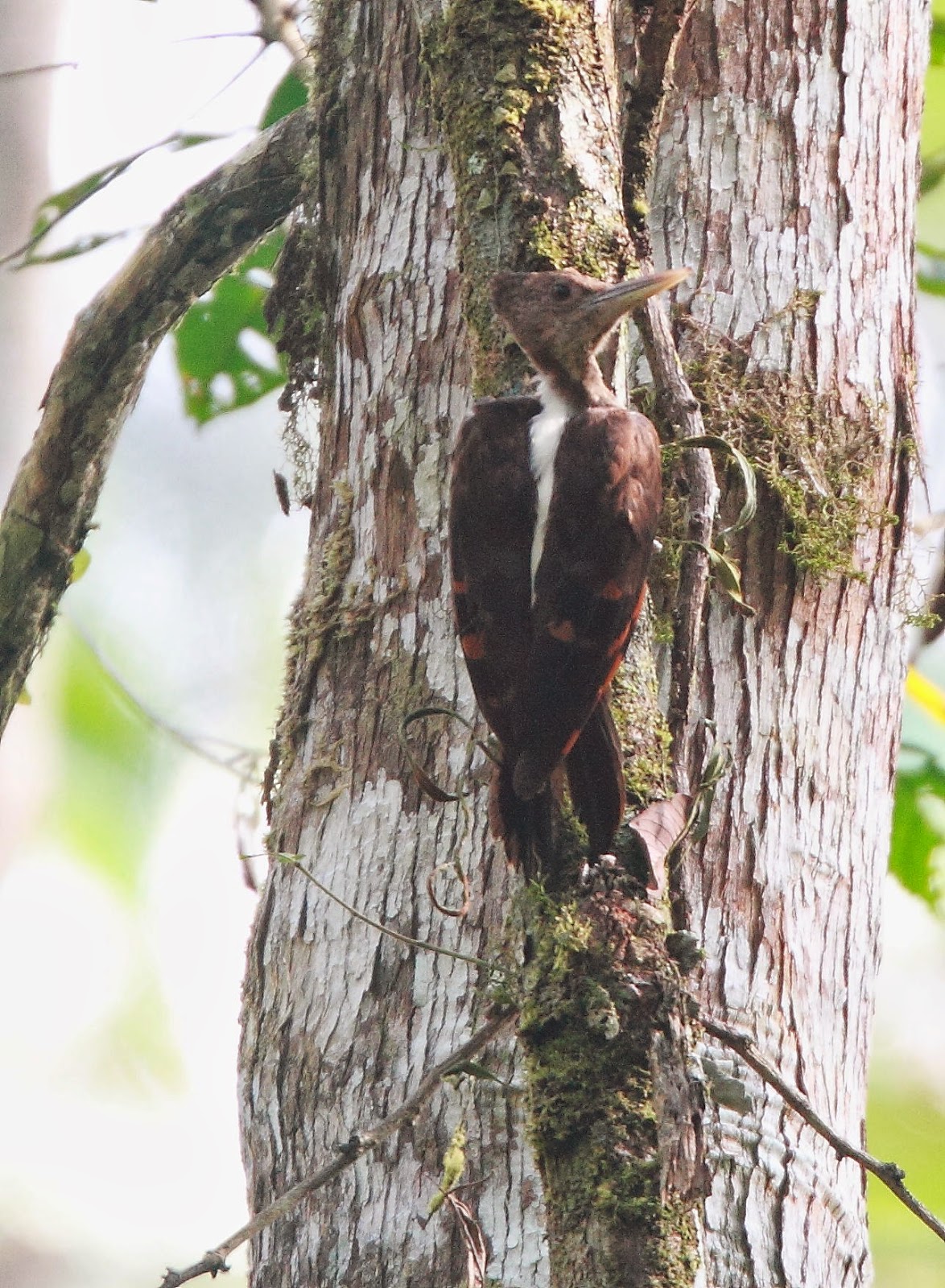 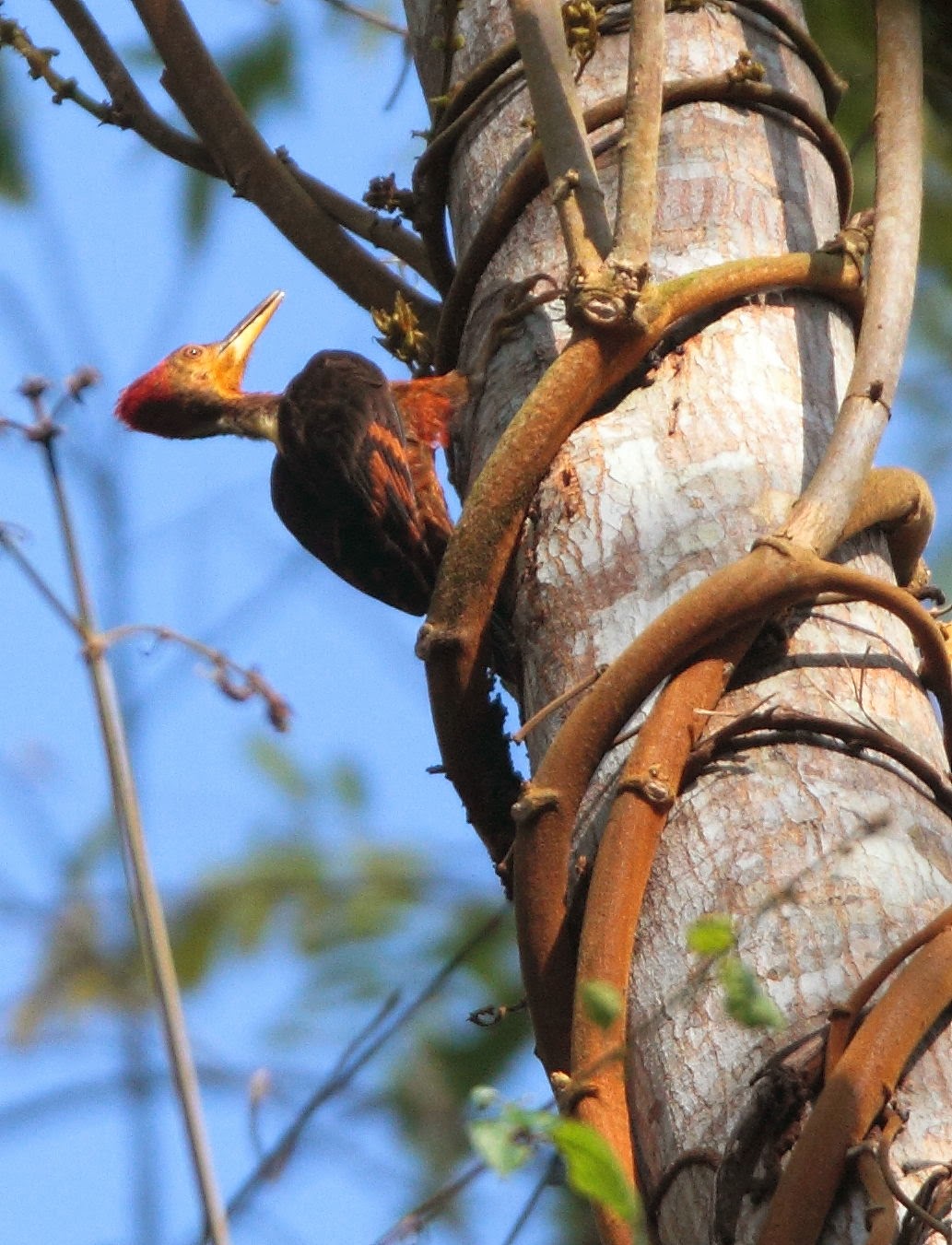 A blurred shot of the Spectacled Spiderhunter. they somewhat keeps to the higher storey. 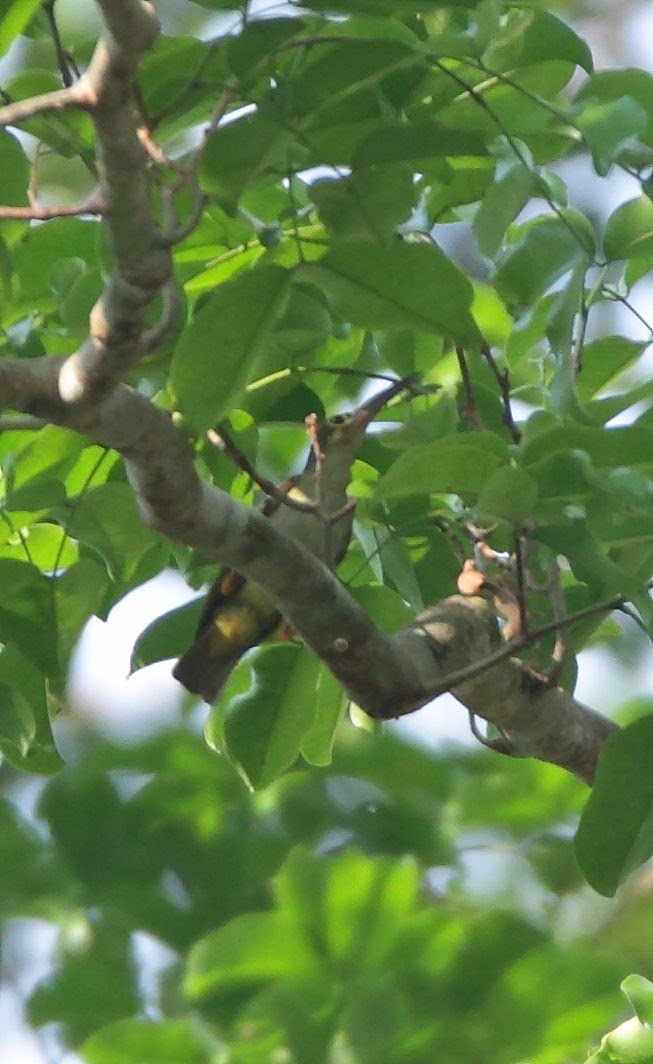 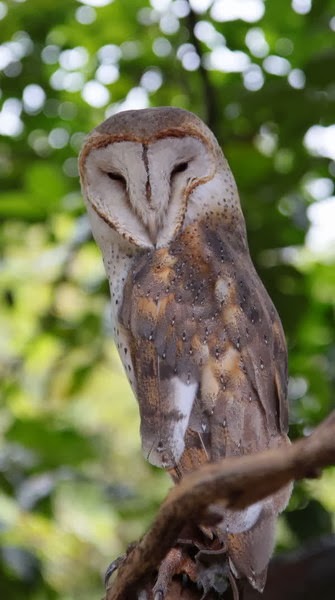 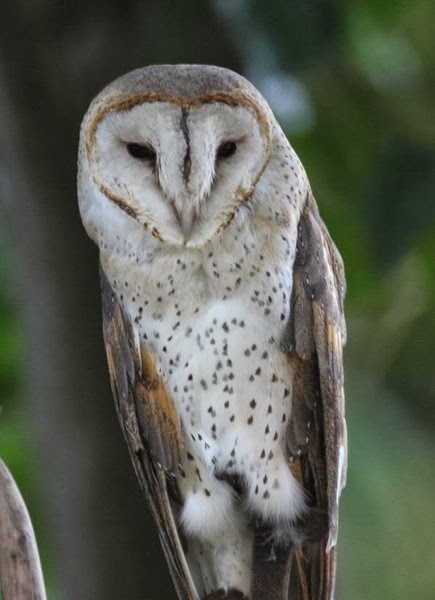 Barn Owl is the most widely distributed species of owl, and one of the most widespread of all birds. It is also referred to as Common Owl. It is found almost anywhere in the world outside polar and desert regions, as well as all of Asia north of the Alpide belt, New Zealand, and most of Indonesia and the Pacific islands. In Malaysia the subspecies is call Tyto Alba Javanicus. Apparently Barn Owls are short-lived birds. Most die in their first year of life, with the average life expectancy being 1 to 2 years in the wild with exceptions.

In Malaysia padi field farmers and plantation managers do provide "barn" boxes for them at their fields as a symbiosis between man- animal. One Owl can catch rats and rodents of a dozen cats. It is a bloody flying mouse trap!

The Barn Owl is a pale, long-winged, long-legged owl with a short squarish tail. Depending on subspecies, it measures c.25-45 cm in overall length, with a wingspan of about 75-100 cm. Tail shape is a way of distinguishing the Barn Owl from true owls when seen in flight, as are the wavering motions and the open dangling feathered legs. The light face with its peculiar shape and the black eyes give the flying bird an odd and startling appearance, like a flat mask with oversized oblique black eyeslits, the ridge of feathers above the bill somewhat resembling a nose

Email ThisBlogThis!Share to TwitterShare to FacebookShare to Pinterest
Labels: owl 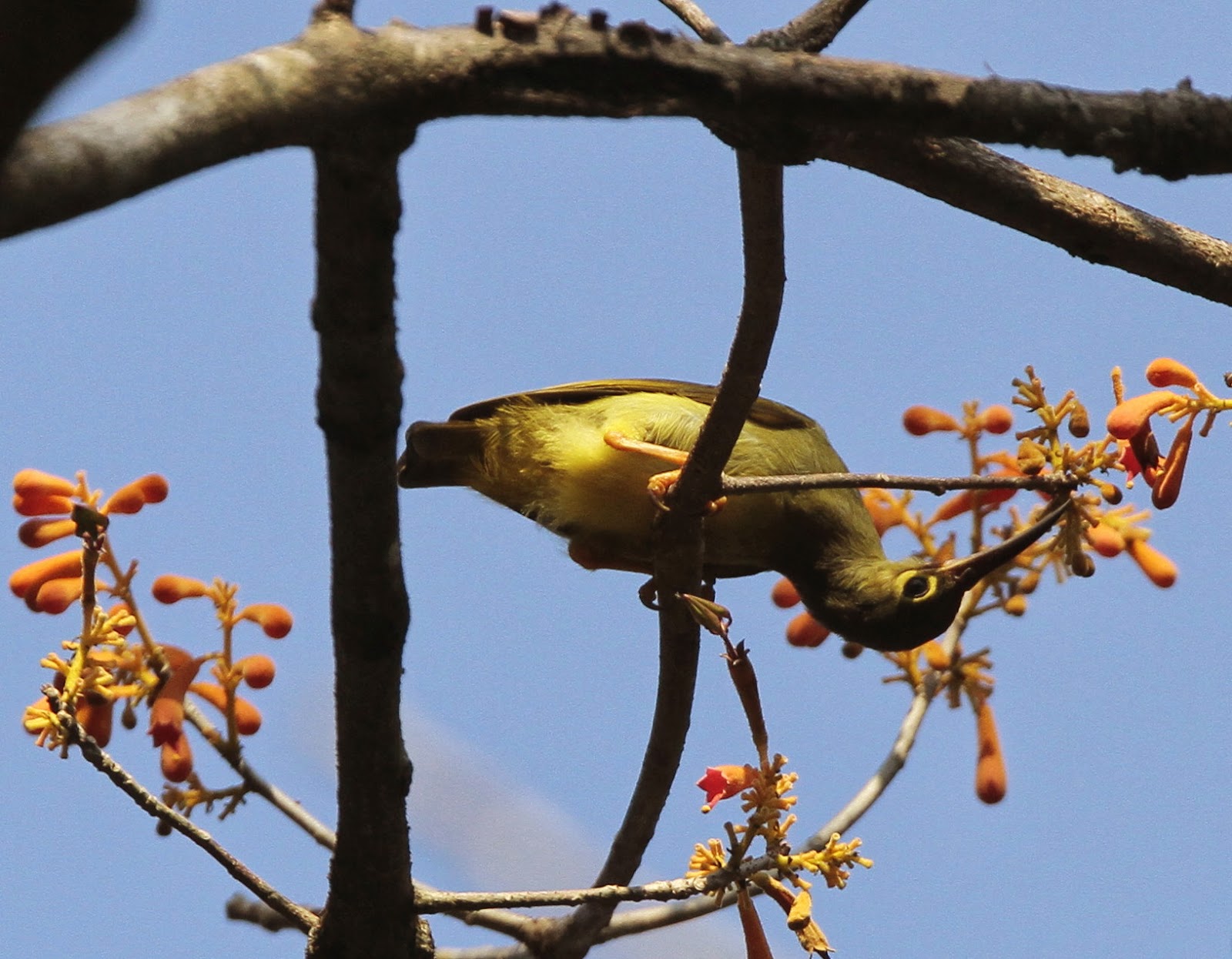 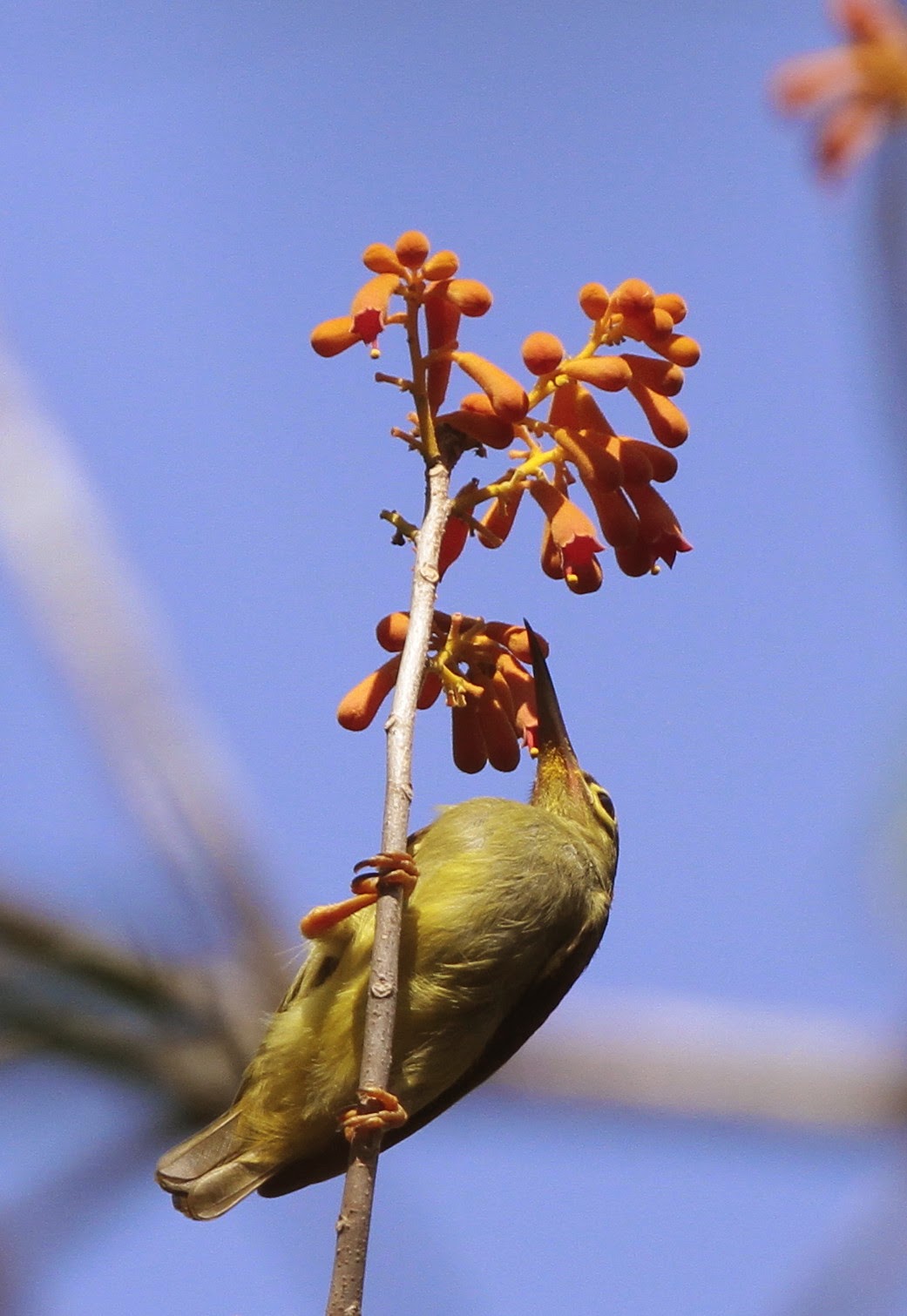 After a month's siesta pull up my socks to bird in the ole hunt in  Bukit Nuang. Did not expect much during the very dry & hot  weather there. First bird to see at the first section of the trail is a single Spectacled Spiderhunter feeding  on nectar of a flowering tree. Later a fledgling flew to the same tree and the adult bird was seen feeding it.

A fruiting ficus tree draws plenty of bulbuls like  black-headed, crested and red-eyes. A pair Asian Fairy Bluebird was also sighted. No good pictures here as the tree was very dense. 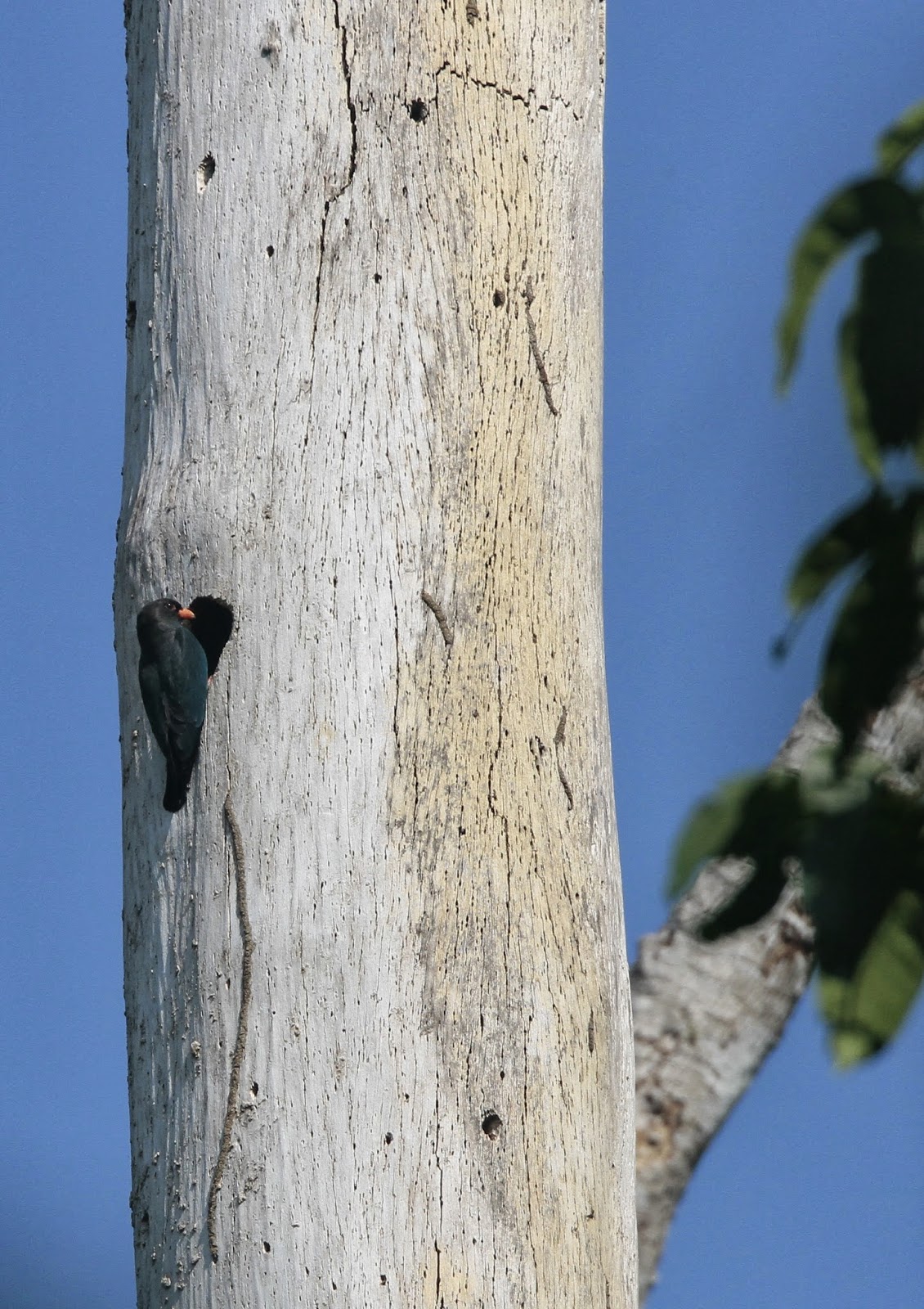 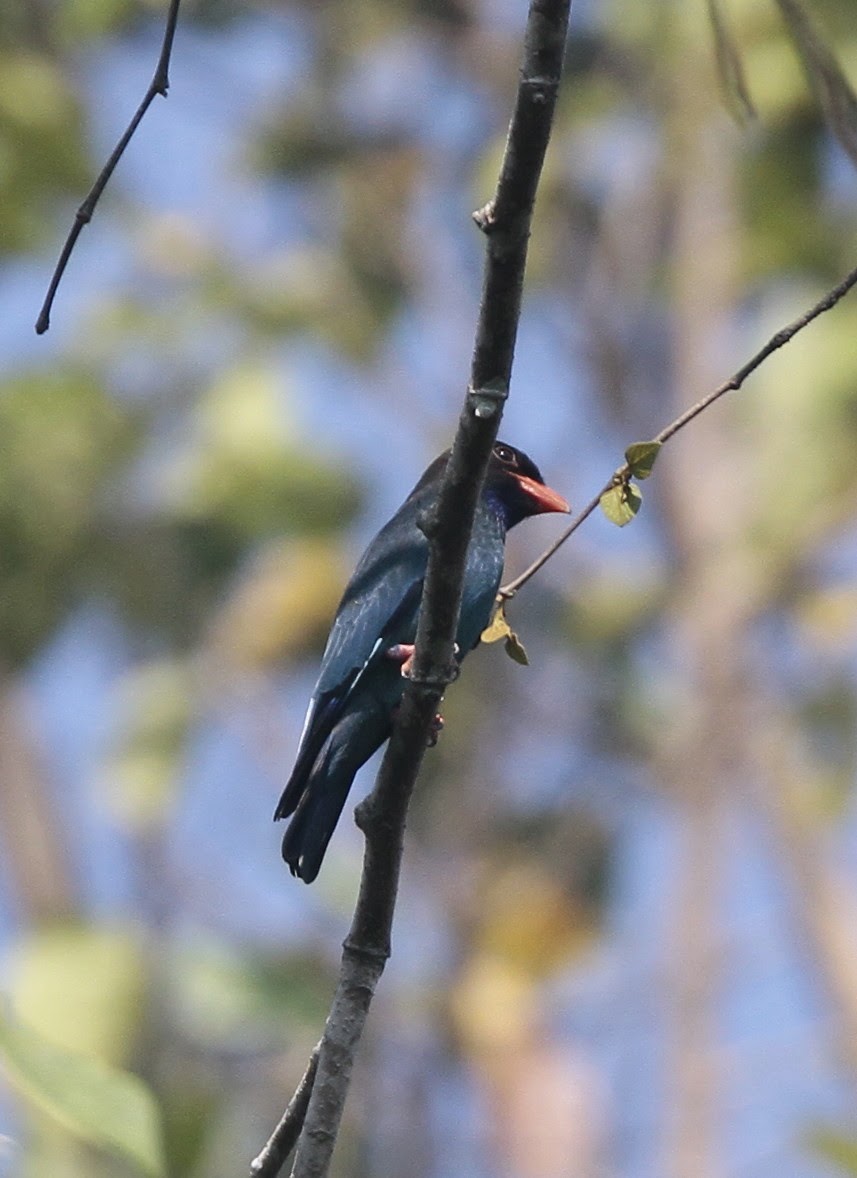 Found a pair of Dollarbird eying a nesting hole 10 m from the ground. 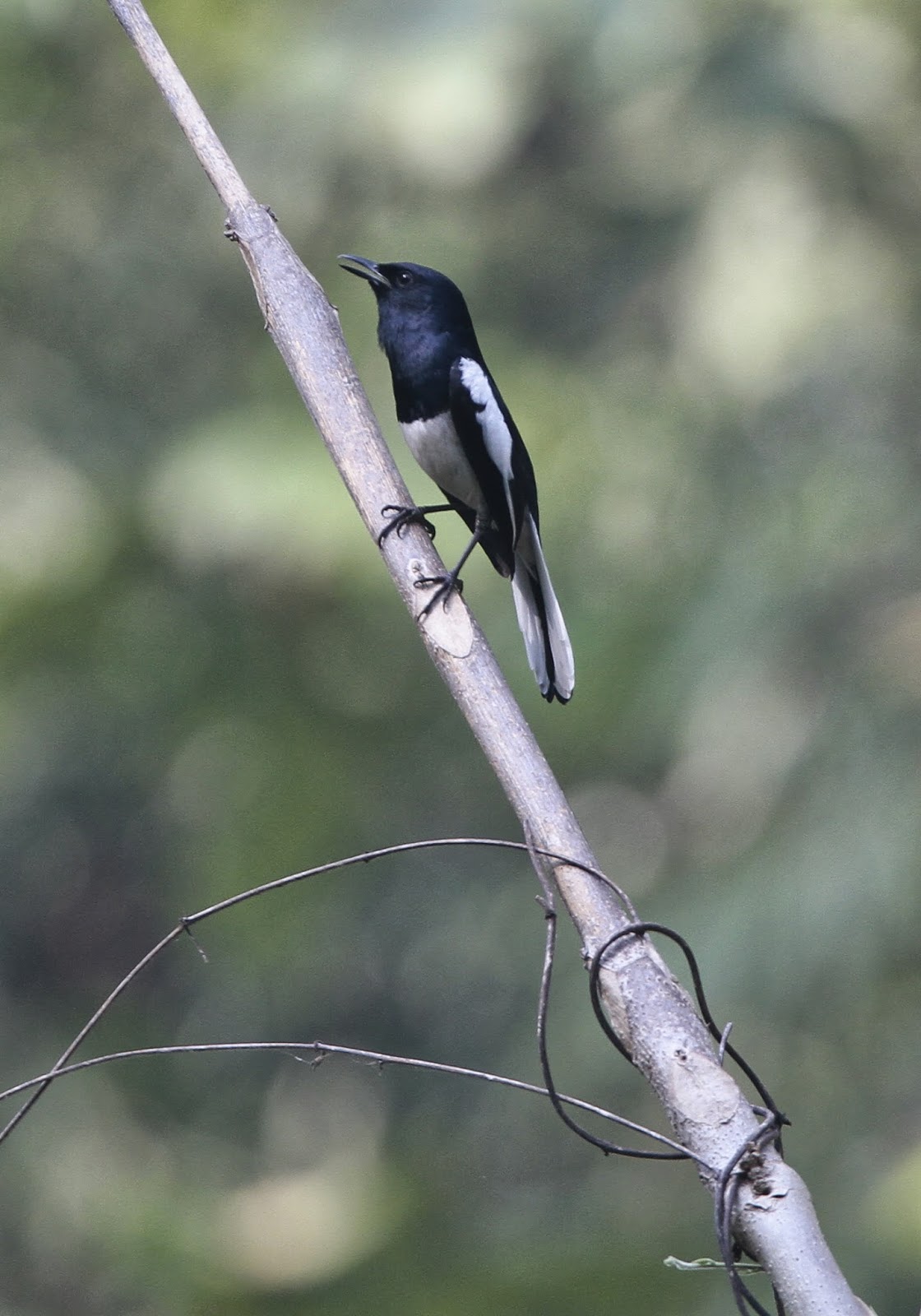 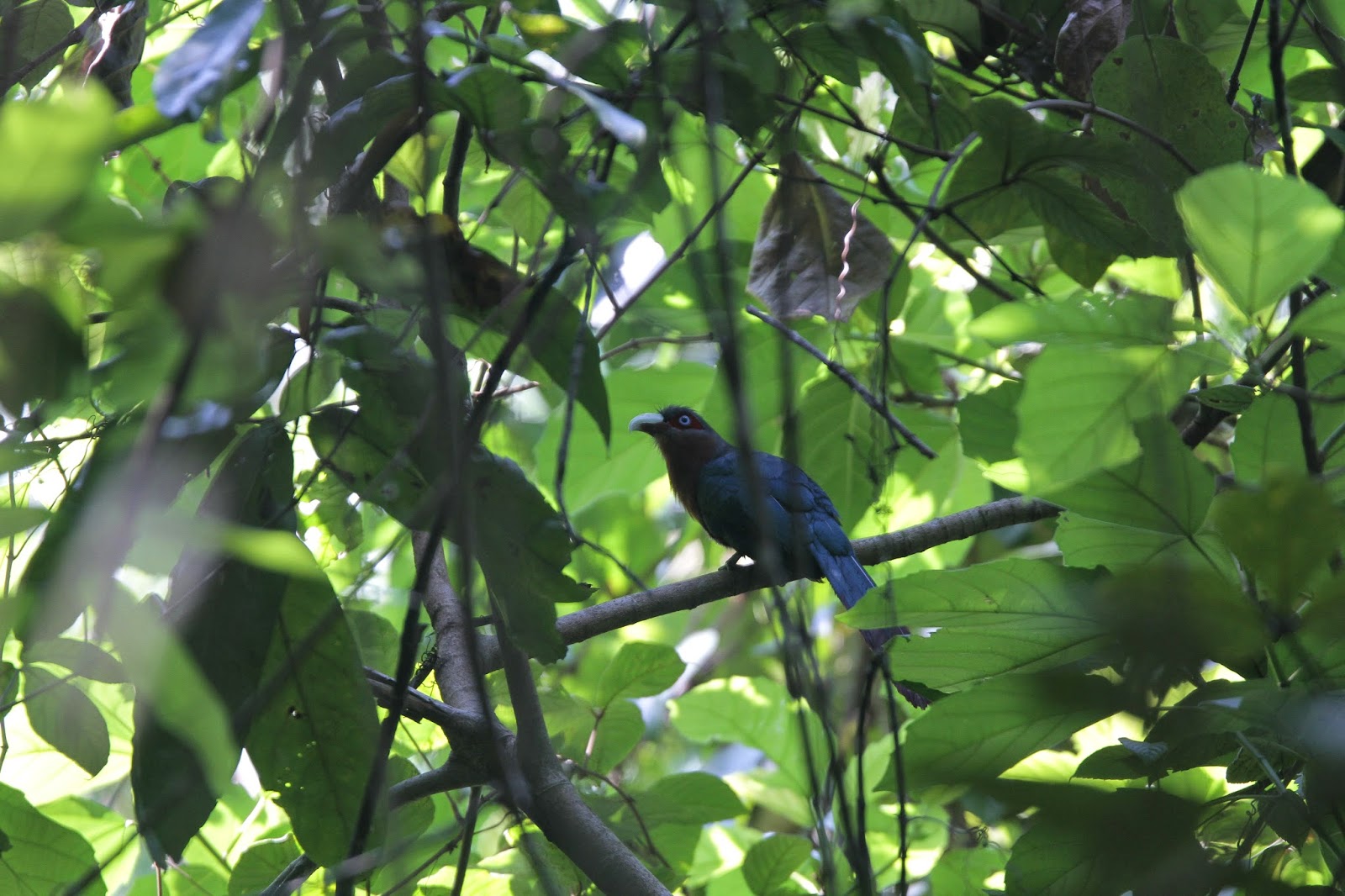 The handsome glowing OM robin which was very confiding whilst the resident Chestnut-breasted Malkoha was a bit shy today. 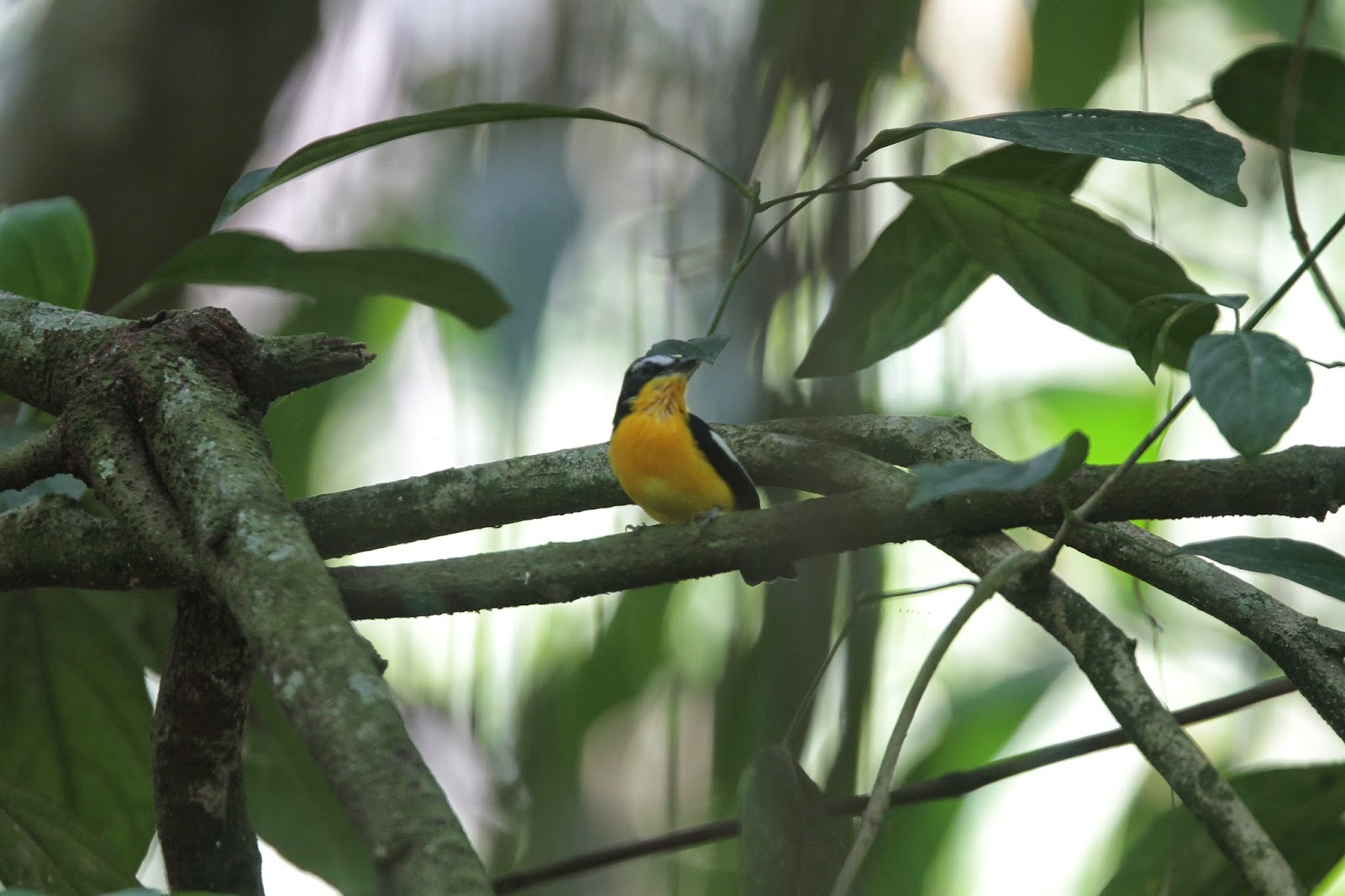 This migrant yellow-rumped flycatcher is common to be seen here since few months past. They tend to keep to the cooler part of undergrowth and stream path. 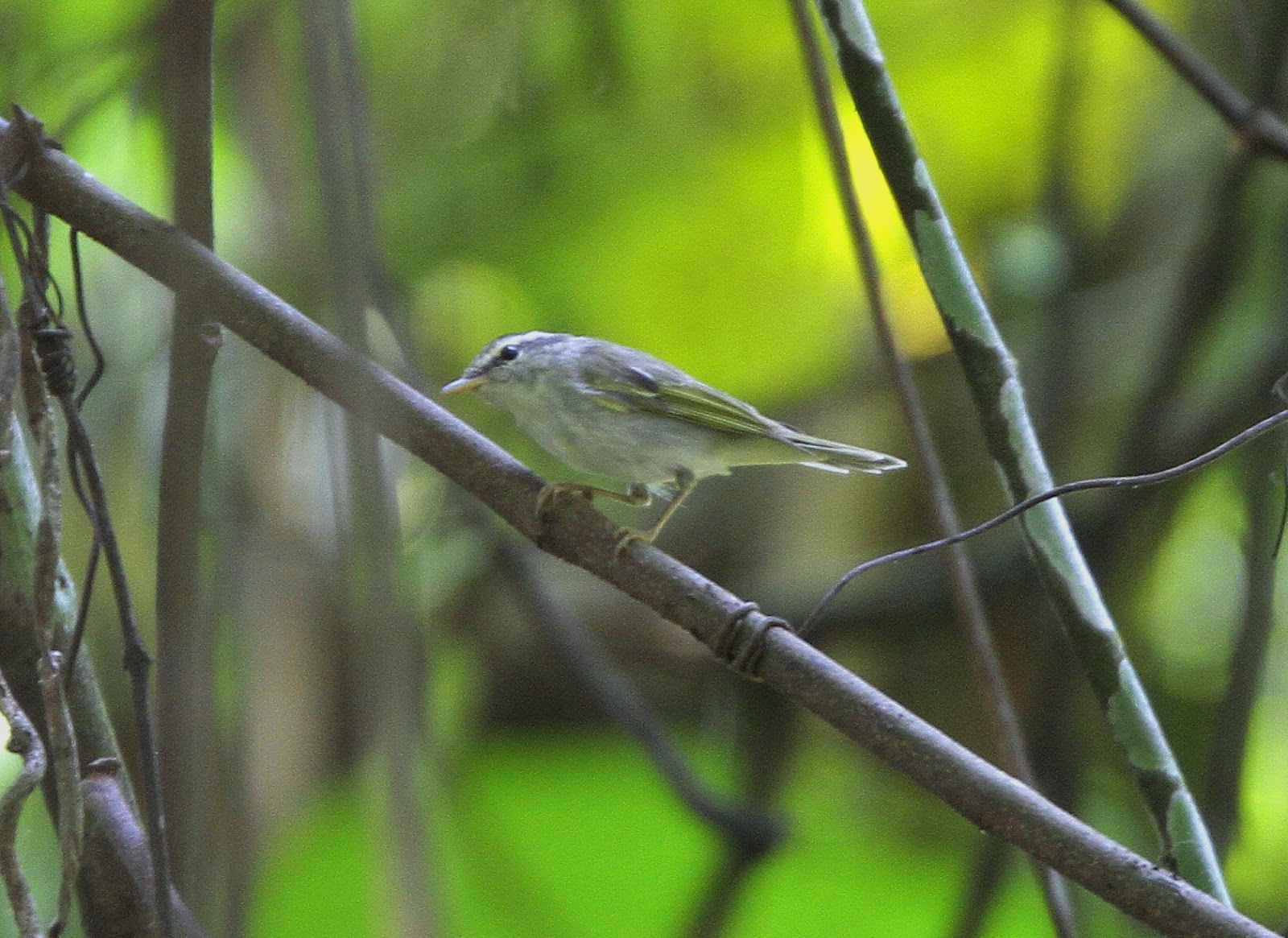 This migrant warbler with a very long white lore and grey body is quite different which I yet to id...... 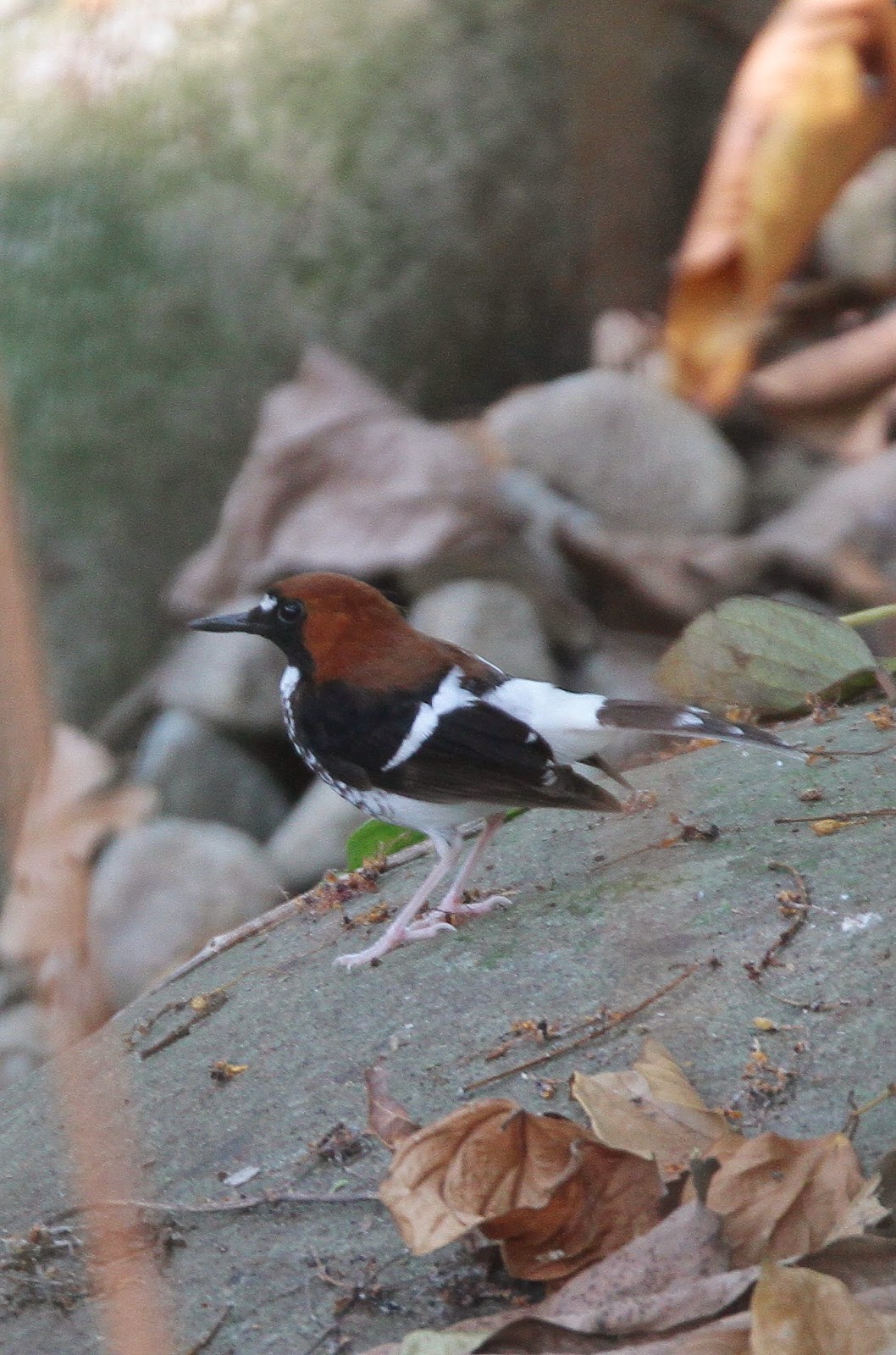 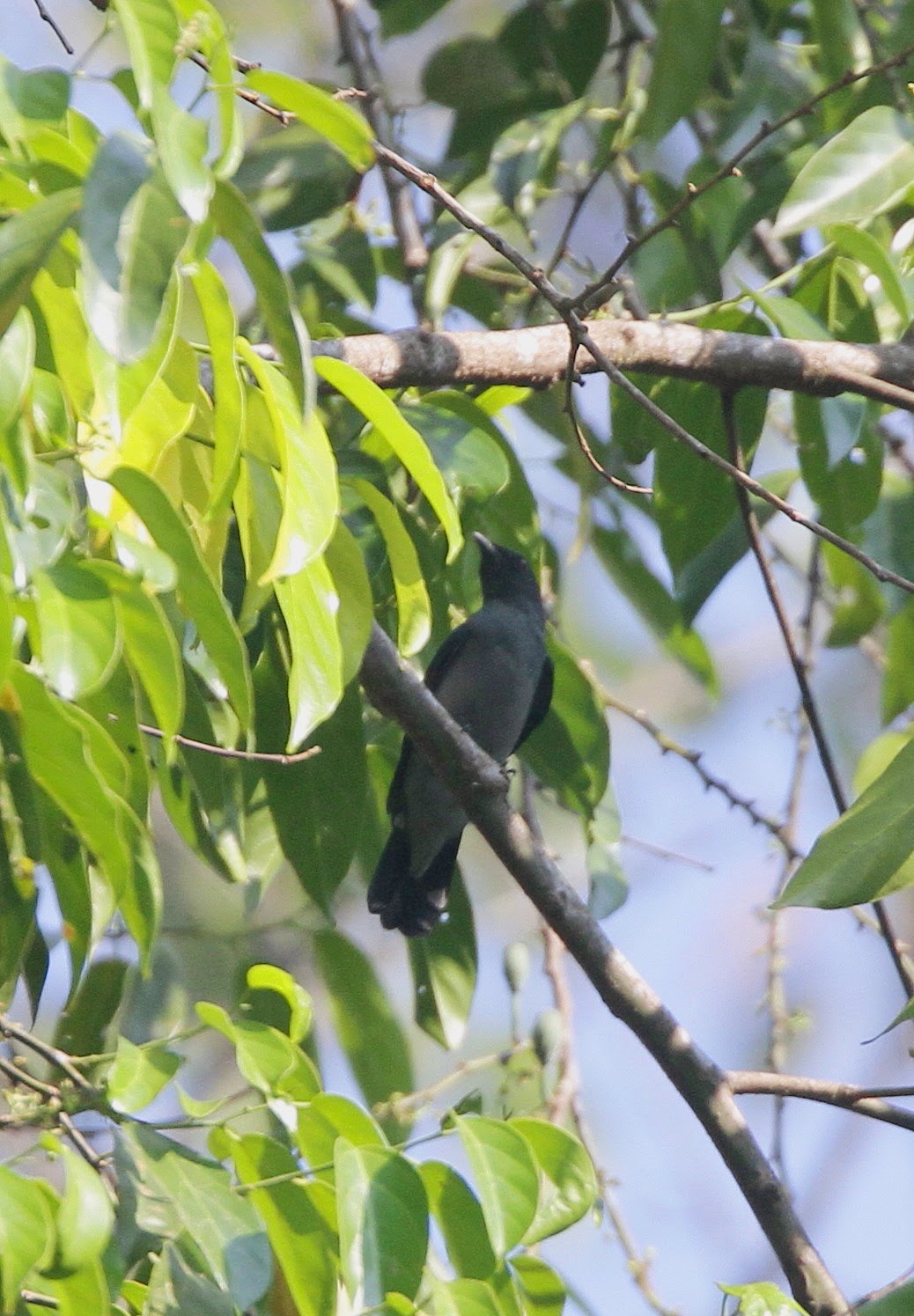 A pair of Chestnut-naped Forktail flew in while I was luring the flycatcher at the stream. On the right a possible Philentoma 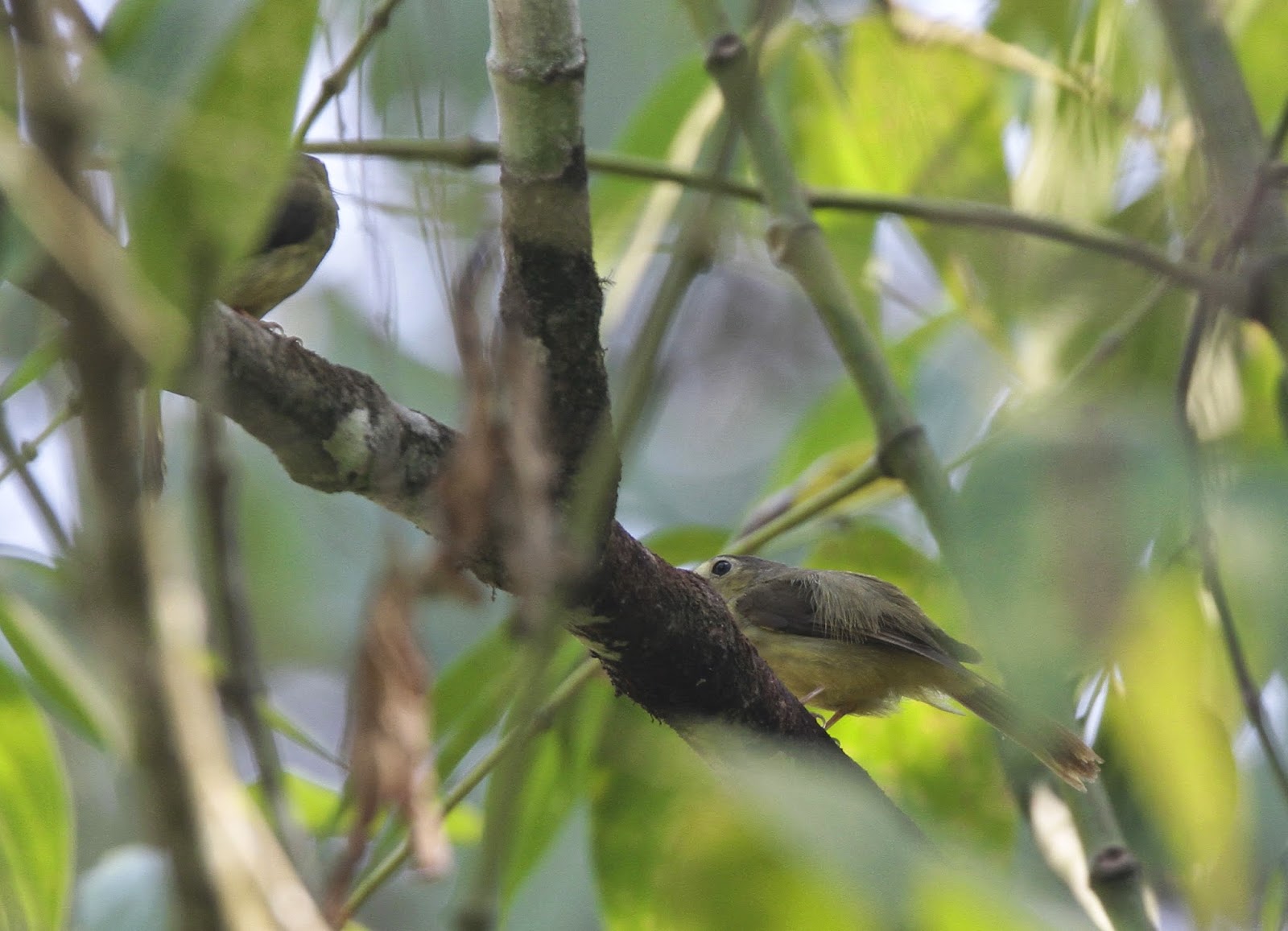 
A pair of this cuckoo was singing in the open at Westport when it responded to my playback.

Still not happy with the Canon 7D video. My wish list for the anticipated upgraded Canon 7D Mark II is that it should have  better video capability ie 4K video will be fantastic.....eagerly waiting.
Posted by mikebirder at 02:00:00 No comments: