Launching of the new Fujifilm XF 100-400mm F4.5-5.6 R LM OIS WR  in the month of January 2016 receive lukewarm reception amongst birders. At the same time the Leica DG Vario-Elmar 100-400mm F4-6.3 ASPH Panasonic FourThird system was also launched whilst the Olympus 300mm F4 was launched but yet to reach our shores. So now birders have a cheaper and  wider choice of bird photo gear to choose from.

If you are not into Fuji system I doubt a person will fork out RM15,000-17,000 in total to change his gear.  I am a Fuji guy besides owning a Canon setup; so forking out another few grands is still ok. You must have read many good review already of this XF lens but is it good for birding.

The latest June 2016 retail price have dropped to about  RM7,500.00 from its launched price of RM8,500.00.  I was offered  this XF lens almost brand new at a price that I cannot refuse. Its portability was what enticed me to purchase as I do travel overseas and I would not want to lose the opportunity to shoot birds with a lighter set up whilst on the move  overseas. 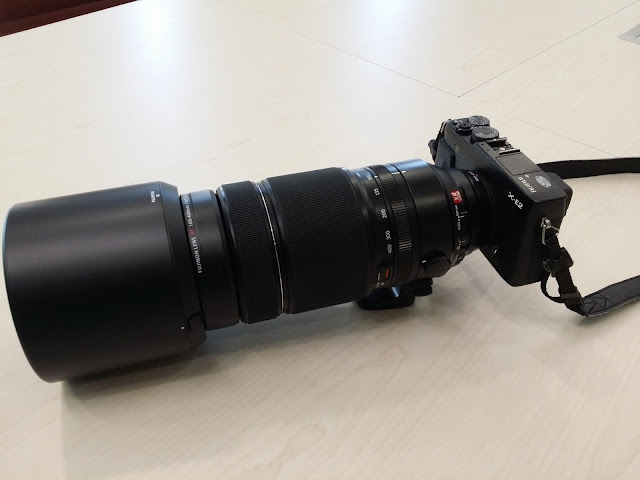 This XF 100-400mm lens supposedly one of the sharpest telephoto lens ever make by Fuji. The only birding buddy that I know who is using this Fuji  setup (X-pro2 body) is Dato Foo SL. He has high praise for the lens. Unfortunately he do not blog nor have a facebook account for you  to really appreciate the quality of his bird photos. Mindfully he is in his 60s!!! Usually he shoots in jpeg at a speed TV180-250 at high iso upto 12800.  He did commented that the focussing in low contrast subject is an issue as well as close up. I seen some of his photos which are cropped because of the distance  in  low light; the feather details of the subject bird is mushy or flat. Nevertheless its is still acceptable for lifer records. 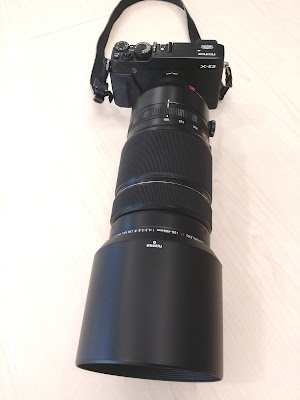 2. The short length of the lens (less than a feet) can be pack away in your hand luggage when travelling. That is a tremendous plus point. 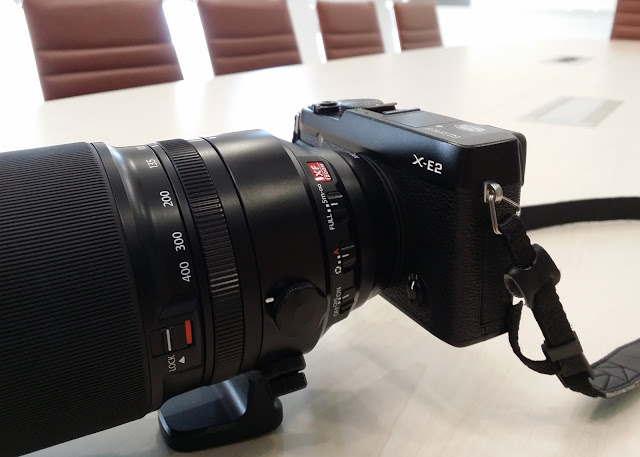 The Bad side of Fuji XF 100-400mm and X series bodies  mirrorless setup for birding:

Dislike: What I do not like is the collar stand which is a bit miniature and do not balance well with any of its X-bodies thus the hood will always touches the ground.
Dislike: You got to have extra battery pack on standby as one battery allows you to take only 250-300 pictures.

Scenario 1: So far I tested the lens AF with my X-E2 it tends to hunt in close quarters of 10 ft or so (full frame). At time you have to manual focus. As mentioned in low contrast subject or back light shooting you will encounter focussing issue too. In the case of the Javan Sparrow if you focus on the uniform body the focussing will hunt.

Scenario 2: In low light condition and shooting bird the size of  banana in the distance with heavy foliage or obstruction in between the bird and the camera; the Fuji setup is totally hopeless even if you can manual focus especially handheld. Current  resolution of  my X-E2 EVF make  visualisation through the eye piece from a distance beyond 30 ft 7.5m impossible for me.

Conclusion 1:  Shooting in open ground, perch setup or bird in flight (BIF) the setup is perfectly suited and have no problem at all. Shooting on the move in jungle low light environment you may miss some lifers due to hunting focussing amongst the foliage clutter background.

Wish List:
1. What I would like to see from Fuji is that EVF or the LCD screen can be digitally zoom in 2X- 4X like the Canon 7D (LCD screen with mirror lockup) which can help focussing  in a way of small birds in the distance. I find it useful  to get  sharper bird pictures for distance of  50 ft out . I am surprise that this feature is missing still for such an advance camera maker.

3. Another wishful thought is whether  Fuji can include the algorithm of a bird silhouette or any subject for that matter be recognised by the camera focussing system. How nice if we can input a picture of a particular bird we are hunting which the camera can recognise.